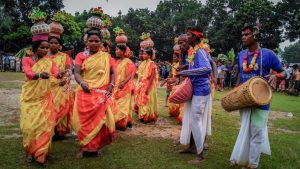 The initiative, taken under the project titled “Connecting voice of the ethnic and excluded minorities through radio programmes”

In a move to integrate the voice of youths from ethnic and excluded minorities in the mainstream media, Bangladesh Betar will be airing 112 radio programmes in its commercial service with support from UNDP’s Human Rights Programme.

The initiative, taken under the project titled “Connecting voice of the ethnic and excluded minorities through radio programmes”, aims to create awareness and develop the skills of the youths from the plain land Ethnic minority groups on their rights and development issues.

“The scope of working with UNDP especially on Human Rights issues is something we are looking forward to,” Director General of the state-owned radio broadcasting organization, Narayan Chandra Shil, said.

“Bangladesh Betar has a vast network across the country and has strong potential as a tool to reach the marginalised people,”  HRP’s Chief Technical Advisor, Sharmeela Rassool, said. She also hoped that it would serve its purpose of reaching the people to create awareness of their rights.

“When we talk about the global agenda to achieve the SDGs, we have to inherently understand that it means that no one can be left behind, be that they are minorities or excluded group,” Sharmeela added.

They were speaking at a two-day workshop, held from 16 to 17 January 2019 at Dhaka, to develop the capacity of youth from the Ethnic and Excluded minority groups to produce radio content on different right based issues.

Dr. Mir Shah Alam, Director of the Commercial Service, expressed hope that this partnership will create a new corridor between HRP-UNDP and Bangladesh Betar. Mr. Kamal Ahmed, Director (Programme) pointed out that radio programmes can have a strong role as a catalyst to build awareness.

Over 20 youth leaders from seven different ethnic and excluded groups such as Garo, Santal, Hajong, Khasia, Mahato, Dalit and Harijan communities participated in the workshop. Bangladesh Betar and UNDP officials took sessions on how to produce radio magazines on selected rights-based issues.

Shipon Rabidas, one of the participants of the workshop, expressed hopes that the knowledge he acquired through the workshop will help to voice the problems faced by his community. Another participant, Fency Sumer, commented that she will try to explore the vulnerabilities of the women in her community through her programmes.

The 20-minute programmes are expected to be aired from 1 March 2019 from the Dhaka, Khulna, Rangpur, Rajshahi, Barishal and Sylhet stations.